Path of Fire is coming! 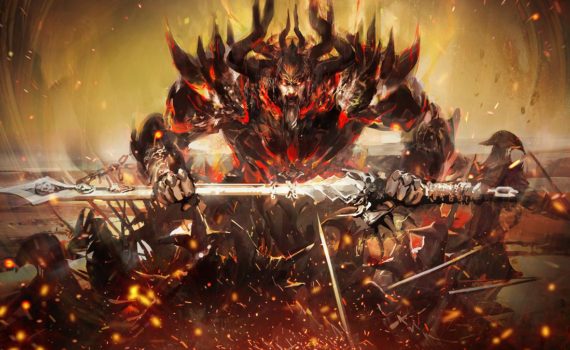 Path of Fire is coming!

The fires of war are burning in the South as the rogue god Balthazar wages a scorchedearth campaign against the Elder Dragons. Follow his path to the Crystal Desert and Elona. Tyria’s fate hangs in the balance. Join thousands of other players in a persistent online world in Guild Wars 2: Path of Fire, the second expansion to the award-winning Guild Wars 2. You’ll experience a new chapter in Tyria’s story, explore vast new maps astride your very own mounts, and unlock nine new elite specializations to customize your playstyle.

• The Spearmarshal’s Gift. A special gift from an anonymous friend in Elona. Use this to choose one weapon skin from the Sunspear Weapon Set.
• “Elonian Envoy” Title. Whether you’re a new arrival to Elona or coming home, build bridges by displaying this symbol of respect and friendship.
• Miniature Balthazar. This exclusive miniature replica of the god of War and Fire is on the warpath…as long as he’s following you.

• Additional character slot. Unlock an additional slot to create a new character on your game account.
• Identity Repair Kit. Give an existing character a brand new look and name with a Total Makeover Kit and Name Change Contract.
• Sunspear Outfit. An heirloom passed down by Elona’s greatest heroes. Unlock the Sunspear Outfit for use by every character on your account.
• Lily of the Elon permanent pass. Rub elbows with Amnoon’s nobility—and its criminal underground—on a luxury riverboat casino outfitted with vendors and other convenient amenities.

When you purchase Guild Wars 2: Path of Fire, you’ll receive a Max-Level Boost to instantly raise one character’s level to 80. You’ll gain immediate access to Guild Wars 2’s max-level content, along with gear and gold to help you begin your journey.

• Mounts. Mounts are far more than a speed boost—they’re a whole new way to explore the world of Tyria. Unlock and train them using the max-level Mastery progression system, and explore freely by leaping across canyons, bounding up high cliffs, and skimming over quicksand.
• Elite specializations. Evolve and customize your level 80 characters with new elite specializations for every profession. With a variety of  laystyles, weapon choices, and traits to choose from, there are more options than ever to play your way.
• New rewards. Collect and upgrade armor sets and weapon skins that reflect the beauty, magic, and culture of the desert.
• Bounties. Kick off challenging boss events whenever you’re ready to take them on. Everyone can join the hunt!
• No Subscription. Get the game and play. It’s that simple. No further purchases required. You don’t need to purchase the previous expansion, Guild Wars 2: Heart of Thorns, to play. In addition, when you make a Guild Wars 2 account, the entire core game is yours to explore free.