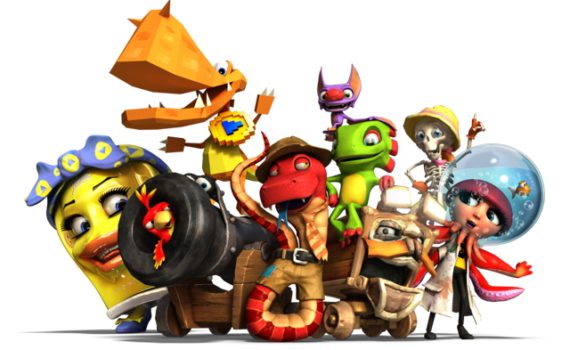 When Playtonic first announced the game on Kickstarter back in 2015, it took less than an hour to reach its initial funding goal of £175,000, and less than a day to hit £1m. Yooka-Laylee ended up raising over £2m.

There’s clearly an appetite for titles harking back to the N64’s heyday, then, but for Playtonic’s managing director and creative lead Gavin Price (pictured below), Yooka-Laylee isn’t just about bringing back the 3D platformer days of yore.

“I think first of all we’ve tried to capture the core audience, the people who backed us and the people who fit the profile of what our backers are,” Price tells MCV.

“There are those who didn’t back us at the time and took a wait and see approach, but with Playtonic as a whole, we’re trying to be a company which provides games for anyone, anywhere – broad appeal, mass market.”

“Even if a young gamer can’t complete an objective in the game, they can just sit and hold the controller and run around with the characters and have fun. We introduced the co-op mode to help get younger players in, so I think that’s how we plan to grow the audience and get Yooka-Laylee to reach new players who don’t remember the content we’ve done and have been credited with in the past.”

TWO OF A KIND

In addition to its digital release on PS4, Xbox One and PC on April 11th, Playtonic and publisher Team17 are also partnering with Sold Out to bring Yooka-Laylee to retail – a move Price says is the perfect fit for its family-friendly gameplay.

“I think for the kind of gamer we’re attracting and hoping to attract, they’re still very much  physical retail buyers,” Price explains. “It’s a family that has to go in to a store and be educated by what they see on the shelves, and they’re not going to be someone who spends two hours surfing the web for hardcore gaming websites and the latest news. They still rely on retail to get an understanding of what’s going on.”

“Even though we’ve inadvertently made a much bigger game than we realised when we actually started sitting down and playing through it, we’ve always built the game from the ground up with content that can be accessible to someone who isn’t time-rich and who doesn’t have a lot time to spend [playing games],” says Price.

“Features such as the co-op and couch multiplayer [are also aimed at] family gamers who are looking for that game where parents can perhaps play it when they’re just around [by themselves] to when the family is all there and everyone can pick up a pad and everyone can play as something to do.

“With the Kickstarter campaign, we’ve always had a massive single goal of delivering on what that campaign promised, and hopefully we’re doing enough alongside that with a really nice colourful game, approachable characters, to attract a whole new audience as well.”

Of course, after the backlash over the price of Hello Games’ No Man’s Sky, deciding how much Yooka-Laylee should cost at retail inevitably became a bit of a minefield.

“The word ‘indie’ is a label now that means one thing and yet price-wise, I don’t think that a game that’s independently developed means it has to fall into a certain price bracket,” says Price.

“It should all be judged based on the game quality and length itself. I can certainly see why there’s value for games at a variety of different prices and it would be great to see more indie content have physical releases and it be a viable business for them, and the price structures at physical retail be flexible enough to allow that. I’d certainly buy it myself,” he enthuses.

Regardless of its boxed cost, though, Price remains confident that Yooka-Laylee’s appeal will be strong enough to even tempt lapsed gamers back into the fold as well:

“We’ve been speaking to some of my friends I’ve known since school, but the one that got me into video games doesn’t play games anymore. As soon as he saw Yooka-Laylee, though, he was like ‘Wow, I’ve got to go and buy a console to play this. I didn’t think games were like this anymore.’ So I guess we’ll hopefully be bringing a few more people back as well.”