Telltale may have transformed the way episodic games are delivered on digital platforms, but the studio's subsequent season pass discs that arrive at retail have also been a huge hit for the company, MCV can reveal. 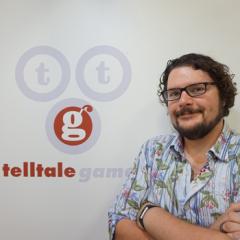 "We pioneered the sort of  digital-to-retail model early on with The Walking Dead in 2012, and now that every console's connected online, the season pass disc structure means we're able to premiere in stores the same day we premiere digitally."

He's not worried about gamers potentially trading in those season pass discs, either: "The disc itself will access the content as it becomes available, which is a little different from buying a code or purchasing the rights digitally, as the discs are tradable, exchangeable and sellable. So it becomes this nice in-between where consumers are happy, we're happy, retailers are super happy, and we've been finding a great amount of success with the model."

Indeed, Stauffer said Telltale has "big expectations" for the forthcoming season pass discs of Batman: The Enemy Within and Minecraft: Story Mode – Season Two, and that the company's also looking into shipping more games on disc in full once they're completed, such as the recent physical edition of Minecraft Story Mode: The Complete Adventure for the Nintendo Switch.

"We're really happy about [The Complete Adventure on Switch], and we expect to see more of our games heading to Switch very soon, too," Stauffer added. "The next game you'll see [on Switch] after Minecraft may very well be the first season of Batman, as it's still fresh in the studio right now, and we expect to follow it up soon with other titles like Guardians of the Galaxy and Minecraft: Story Mode – Season Two."

Those might sound like rather 'safe' and family-friendly choices compared to the rest of Telltale's slate, but Stauffer assured us that nothing was outside the realms of possibility for Switch.

"We're looking backwards and forwards [in our portfolio] and we're really excited about the Switch. To say we're steering away from other content because the audience isn't there isn't true. Looking at The Walking Dead, for instance, I don't think we're in as much of a rush right now, because looking into earlier seasons might require some additional effort to bring our content up to speed and up to Nintendo's standards.

"No series is out of the question for us to bring to Switch. We'll be examining everything and hopefully making a lot of fans happy. Plain and simple, the Nintendo Switch is a perfect match for Telltale. [Development has been] seamless and perfectly suited to everything that we do."

Going forward, Telltale has its sights set on an almost TV-like production structure, with yearly instalments of its games.

"Right now, our work is about elevating the Telltale brand, in and of itself, and how we've come into our own as more of a kind of interactive TV network and a studio that's really doing something different where we're writing and designing and releasing content on a regular basis across multiple different genres, whether that's an apocalyptic undead drama like The Walking Dead, or a family-driven comedy adventure like Minecraft, or sci-fi action like Guardians of the Galaxy. To have this footprint now that sits firmly between video games and premiere narrative entertainment – something between video games and HBO and Netflix – that's what we're really proud of and how we've grown out right across everything.

"I think you're going to start seeing our format design start to change and evolve over the next 18 months, just as well as you're going to see maybe our episodic release structure change and evolve. Right now, you're used to seeing five episodes come out per series, and even something as simple as that could change very soon. The cadence at which you're getting those episodes is going to change very soon. So, as we move into 2018, players can expect an evolution of Telltale both in design and release structure happening incrementally and hopefully with the games you've been wanting to see from us the most."