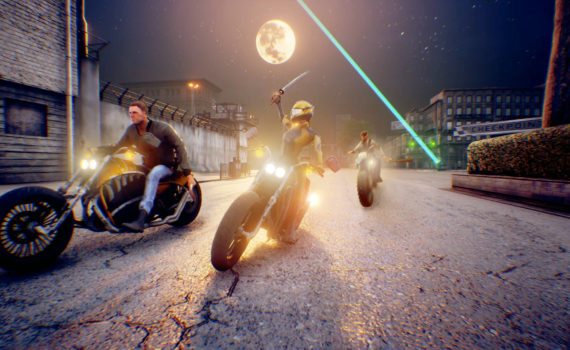 Road Rage is an over-the-top motorcycle action game in which players race, battle and hustle their way up the ranks of an outlaw motorcycle gang. Joyride around an open-world city torn apart by underground crime, earning money and building a reputation for taking no prisoners in knock-down, drag-out, high-speed combat.

Ride in style on a variety of customizable bikes, then push them to the limit in all-out gang warfare with an arsenal of hard-hitting weapons and slick maneuvers through over 90 story-driven and side missions.

Road Rage is available to preorder now and is rated M (Mature) by the ESRB. For the latest updates as release approaches, visit www.road–rage-the-game.com, and follow MaximumGames on Facebook and @MaximumGames Twitter.

Maximum Games ranks as a top 15 global video game publisher of interactive digital entertainment spanning all genres and supporting multi-platforms. The company’s mission is to provide a proven and strong hands-on approach to publishing, marketing and distribution. Established in 2009, the company is led by female entrepreneur Christina Seelye, a seasoned executive of digital consumer products and channel marketing. Under Seelye’s leadership, the company has been recognized with numerous awards such as “Fastest Growing Tech Company” by American Business Awards, and has made the Inc. 5000 list of Fastest Growing Private Companies for the past three years. Maximum Games has offices in both the US and UK, and continues to expand its scope of global publishing and distribution via direct reach and strategic partnerships. For more information on Maximum Games, visit the company’s website at www.MaximumGames.com.