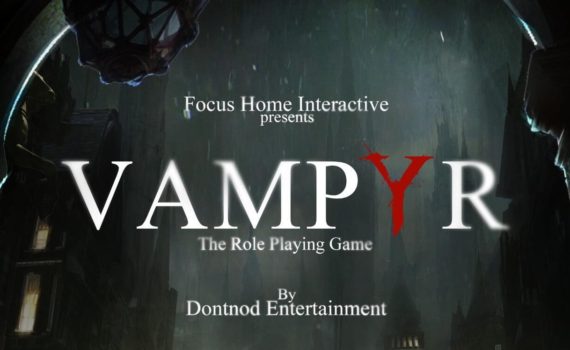 Vampyr is a grim Action RPG set in 1918 London ravaged by the Spanish flu and years of war. As players explore the devastated city they will unravel a deep narrative that evolves based on their decisions resulting in multiple dark endings (or one, elusive happy ending). Vampyr’s free form combat system allows players to choose from a large pool of skills and mix human-like styles with powerful vampiric attacks.”

PRE-ORDER NOW AND GET THE HUNTERS HEIRLOOMS DLC
The DLC includes two weapons from famous past hunters:
Dragonbane, the sword of Paulinus Aurelianus,mythical founder of the Brotherhood of Saint Paul Stole, known as a dragon hunter.
Barker, the pistol of Carl Eldritch, the second leader of the Guard of Priwen – who have taken an oath to hunt down every last vampire.
The DLC also includes a dark physician suit, perfect for a vampire doctor who must travel discretely through London under pouring rain or in the biting cold of the night. *The Hunters Heirlooms DLC will also be made available for purchase after the release of the game.

CURSED BE THE CHOICE…
You are newly-turned Vampyr Dr. Jonathan Reid. As a doctor, you must find a cure to save the city’s flu-ravaged citizens. As a Vampyr, you are cursed to feed on those you vowed to heal. Will you embrace the monster within? Survive and fight against Vampyr hunters, undead skals, and other supernatural creatures. Use your unholy powers to manipulate and delve into the lives of those around you, to decide who will be your next victim. Struggle to live with your decisions… your actions will save or doom London.

BE THE VAMPYR
Fight and manipulate with supernatural abilities. Balance small XP gains from defeating Vampire hunters, against the temptation to feed on civilians, which grant much greater XP gains.”

FEED TO SURVIVE
Be the savior and the stalker. Our newly turned hero is both Vampire and doctor, who must kill in order to survive long enough to find the cure for this Vampire “disease”.

FIGHT MAN AND MONSTER
From Vampire hunters, to mutilated abominations… London’s streets will grow more deadly as the numbers of civilians diminish. Choose from a large pool of skills and mix human-like styles with powerful vampiric attacks”
SHAPE LONDON – A web of interconnected citizens reacts to your decisions. Killing a citizen will have huge consequences in the lives of their relatives and the district they work or reside in.

VAMPYR is developed by DONTNOD Entertainment. DONTNOD is most well known for their exceptional narrative skills as seen in their 2015 release “Life is Strange”. This multiplatform title received an 85 Metacritic and won 20+ Awards including multiple “Game of the Year” awards and “Best Narrative” Awards.