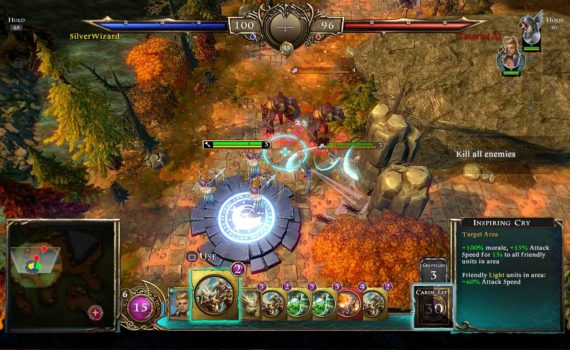 1) Prioritize Objectives – Be sure to prioritize map objectives! Making corpses of your enemies is always fun, but controlling key objectives such as monoliths and life-zapping crystals will force your opponents to send their resources towards you, giving you the upper hand in setting up a counter-attack!

2) Deck Synergy – Build your deck with cards that synergize with each other and with your Champion Card. A quick example of synergy is sending a minion with high attack but low defense into combat, then playing Blood Moon (a card that prevents minions from dying for a limited time) right before they lose all their health, giving them the most bang for their buck before they are gone. Experiment and adapt – the possibilities are endless!

3) Deck Balance – Starting out, we recommend making two-thirds of your deck dedicated to minions, and the remaining third dedicated to spells. Cards in your hand are randomly picked from your deck, so you’ll want to make sure you have enough minion presence on the battlefield to cover key areas. However, at the same time, you want spells you can instantly summon anywhere in order to buff your minions or debuff the enemy.

4) Ordered Chaos – During battle, cards are drawn at random from your deck, but you can still control your luck in the long run. If you only have one copy of each card, you’ll rarely draw the card you want when you need to counter your opponent. Having too many copies of each card means your deck will not be diverse enough to adapt to what’s happening on the battlefield. We find that having two of each card is the sweet spot for controlling your destiny.

5) Focus Fire – When engaging a newly discovered group of enemies, focus your resources to kill the squishiest (easiest to kill) enemy. These enemies generally have high attack or utility, so when those targets go down, the amount of damage they perform on your team goes down significantly, putting you at a huge advantage to win the entire fight. Just be sure to keep an eye on your most valuable assets, and don’t be afraid to retreat to prevent your opponent from getting their bounty!

Buy ArmaGallant: Decks of Destiny today and be sure to share some of your own tips and tricks on our Maximum Games Facebook page!