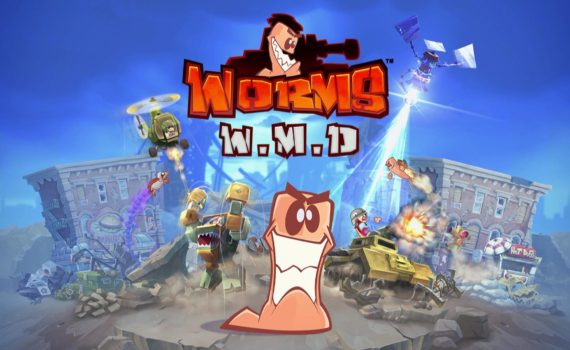 The Worms franchise has long been seen as one of the most competitive out there. Countless hours have been lost by many playing against friends on the sofa, with screams of laughter and more than a few arguments and disagreements. As new titles in the series have added new ideas and tweaked almost everything the core gameplay has always remained the same, and does require a lot of skill.

All of that makes it sound like the perfect candidate to become an eSport. There are a few hurdles to overcome, but with the latest title in the series, Worms WMD, developers Team17 think they have a shot at finally building an eSports community around Worms.

“I suppose the first thing to say with Worms is that we want to enter it into eSports,” says Kevin Carthew, the creative director on Worms WMD. “I think the latest version that we have developed, Worms WMD, is a really good jumping off point for Worms becoming an eSport. If you look at the user reviews on Steam one of the top rated ones has the first line “thumbs up for Worms becoming an eSport” and that made me really really happy, because it means that there is a chance that we can actually explore something, that we can do something with Worms.”

“What ultimately decides if a game becomes an eSport is the community itself, and the support you get from your players,” says community manager Jonno Stanton. “What we can do from a developer’s side, we can engage with the right people to give our players a platform on which they can compete and they can craft the scene. Communication is key. Its shows you are listening to the competitive scene, because the quickest way to kill that flame is to starve it of oxygen, and the oxygen they get is exposure and response from the developer to craft what they feel is the right platform for eSports and Worms.”

Team17 have tried Worms as an eSport before, even running competitions with ESL at the end of last year. The tournaments were hailed as a success, but they also helped to highlight a few issues within the game that could hinder its progress as a top eSport.

“[Worms is] also an RNG based game in regards to when crates spawn, where crates spawn and what spawns on the map,” adds Stanton. “So the challenge for us is to decide to what extend RNG is a good thing. We have the bonus that our game is skill based in regards to weapon usage and map position, so a big challenge is how we handle the random elements of the gameplay that Worms is known and loved for. There is obviously a vast difference between being beaten by someone because they were better than you, and being beaten by someone because a crate spawned right next to them and it had an airstrike in.”

While RNG and the multitude of ways to play the game creates some issues for Worms entering the world of eSports it does have a few key advantages over many other titles that have tried and failed to do so. It is fundamentally a skill based game and allows for the amazing plays and unbelievable action that all the top eSports have, but it is also incredibly simple to understand and watch.

“Worms is a fantastic spectator sport,” says Carthew. “You don’t need to be a wizard on the ninja rope, or be great at the game to enjoy someone getting blown into the water, or prodded into the water, or dying in any endlessly amusing ways. I think Worms is really good fun to watch and I think people could come to it just because they get a kick out of watching it.”