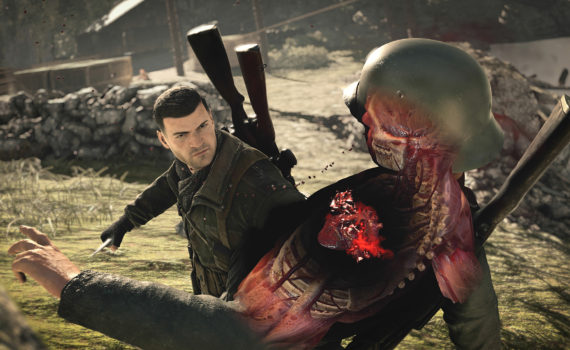 Rebellion is a company full of unique characters that has spent the last 25 years pushing technological boundaries. Jason Kingsley, CEO and creative director of Rebellion says that the company was born out of freelance game work that he and his brother Chris, a co-founder and the company’s CTO, were doing alongside their PhDs.

“We were doing more and more computer game stuff,” says Jason Kingsley. “But we also ended up doing quite a lot of management, because nobody else in the team was doing it. So we ended up managing projects, and trying to coordinate things a little bit, as well as our freelance tasks and we weren’t getting paid for it. “

So the brothers decided to found Rebellion together and go into business for themselves.

“We’ve always wanted to make games that we want to play. One of the problems we’ve always had at Rebellion is that we’re always too ambitious in how we create our environments,” Kingsley says with a smile that indicates he’s not too upset.

“A sniping game means you need to be able to zoom into the distance,” Kingsley continues. “For a lot of people that don’t have sniping in their games, they don’t have to worry about distance and the number of polygons.

“We often feel that we’ve made a rod for our own backs with some of our creative decisions, but our technical team is so good that they can make the best of it and make it really work. And that’s why our games are successful, and why, I think, games like the Sniper Elite series are right up there with the best games in the world from the very expensive and very well funded big studios.”

Kingsley says that the firm is “absolutely” drawn to technical and gameplay challenges that they can try to conquer. It’s something shared by the entire company.

Everything Rebellion creates is built on its own technology, so the studio uses its own engine, and tries to avoid middleware where possible so that everything is tooled towards the game it’s been created for.

“If there’s something we need it to do, we can make the engine do that,” says Kingsley. “We don’t have to worry that ‘Oh, the engine can’t do that so we have to compromise our creative visions’.”

This focus on bettering themselves led to the art team pulling out and reworking the rendering system between Sniper Elite 3 and its sequel, the well-received Sniper Elite 4 but it also means that, of all the projects Payton is most excited about at Rebellion, he’s hoping he’ll get another chance to go back to World War II, as he’s got unfinished business with the Nazi-killing sniper Karl Fairburne.

“I would love to make another Sniper Elite game,” he enthuses. “I think it’s an artistic thing, when you’ve been making something for a while, I think the last third of it, you’re already thinking: ‘Shit, if I do this again, I’d be doing that or I’d be doing this.”

Making games for themselves

Jason Kingsley suggests that the reason Rebellion throws itself so entirely into every technological challenge is that, fundamentally, they’re making games for themselves:

“We’ve always wanted to make computer games that we want to play. That’s the truth of it. We don’t do much in the way of analytics or analysis of what’s the next big thing in computer games, because we just like making the games we like to play.”

Rebellion’s stability, Kingsley opines, is down to its portfolio approach to games so that there’s a mix of projects of different sizes landing at different times with manageable budgets. There’s plenty of room for experiments, but the team doesn’t gamble everything on
a single game.

The company has experimented with VR with Battlezone – “a huge financial success for Rebellion,” Kingsley says, adding that Rebellion is “going to stay in VR.” The studio is also experimenting with remasters of earlier games, with a recent Rogue Trooper release doing good numbers for the company, although Kingsley says the team isn’t keen to just continue retreading old ground when there are new games to release.

New games in this case takes the form of Strange Brigade, a four player co-op shooter that channels something distinctly British in its story of four pulp-era adventures battling mythological creatures for ancient relics and profit. If it works out, it’ll be another successful IP for Rebellion. If not, the studio has several more ideas for what might come next.

Kingsley describes the portfolio approach as a desire to avoid gambling everything on one project. But, as it turns the page on its second quarter-century, the company feels like a sure bet.